Dafydd
I grew up in Tulsa, Oklahoma. I currently live in Pittsburg Kansas, because of cheap real estate. I have lived in Stillwater, Norman, Midwest City, Oklahoma City, Waco, Austin, Bartlesville and El Paso. I have been a Boy Scout, Boy Scout Leader, member of the SCA, Amtguard, Kappa Kappa Psi and two college marching bands. I have played D&D, Champions, and other RPGs. I have attended Baylor, Tulsa Community College, Oklahoma State, Rose State, and the Universtiy of Oklahoma. I did graduate work at the University of Texas. I read Latin and French, both with some difficulty. I used to better with both. I am married with two children. I am a lapsed Anglican. I once was an admin at Wikipedia. 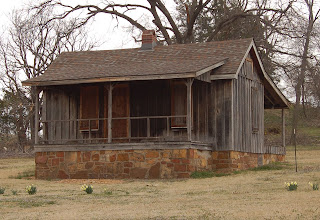 This is the oldest surviving house in Tulsa. It belonged to Reverend Sylvester Morris, a Methodist missionary, who founded many churches in and around Tulsa, including St. Paul's Methodist on Cherry Street. This house was built in the mid 1880s (the Tulsa Historical Society says 1885). Given that the railroad didn't arrive until 1882, that makes this house pretty early. The house is a simple framed building in the "Folk Style". It was originally located in the 400 block of North Cheyenne. It was moved to Owen Park in 1976, after being discovered by the local historian Beryl Ford. Sadly it is in an extremely neglected condition, with the windows and doors boarded over. As the picture at the Tulsa Preservation Commission website shows, when it was first moved, it still had doors and windows. Perhaps Owen Park is not the best place for this monument. The "new" building for the Tulsa Historical Society or Gilcrease Museum are two possible locations that would be better suited. 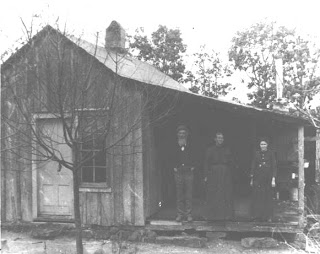 Ford identified the building, in part by, the unusual chimney. He also reportedly also found letters addressed to Morris in the walls of the building. This picture shows the Morris family on the back porch of the house. Although the house in this picture has obvious similarities to the house in Owen Park, I find it interesting that the side door pictured here is nowhere in evidence in the Owen Park house. The missing door, however, could have easily been boarded over in the intervening years. (Photo provided courtesy of Beryl Ford Collection/Rotary Club of Tulsa, Tulsa City-County Library and Tulsa Historical Society.)

The Reverend Morris story had a sad end. In 1907, while returning home late one evening, two lawmen mistook him for a whiskey peddler. The lawmen called for him to stop, but either the elderly man did not here them, or thought that they were highway robbers, and did not stop. The lawmen fired seven shots, two of which struck Morris, killing him. The horses, knowing the way, continued home, bearing the the pioneer's corpse. The killing caused a furor in Tulsa. The two marshals were indicted for murder, but were eventually acquitted. 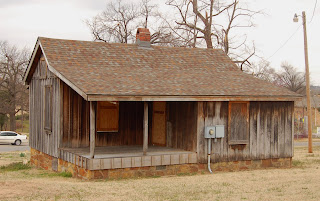 Here's a final picture of the backside of the house. Thanks to my brother, for acting as my photo slave.
Posted by Dafydd at 10:41 AM 1 comment: This is one of my favorite historical buildings in Tulsa, in part because I can find it, and most people don't know that it exists. It took me the better part of an hour to find it the first time though. It is in downtown, being within the inner dispersal loop, but just barely.

The building was built in 1924 and was active in the coffee business until 1961. The railroad tracks run right behind the building. Coffee beans were unloaded directly into the building, where they were roasted and ground. The coffee making machinery is long gong. In 1978, when the building was added to National Register of Historic Places, it still had the last working hydraulic elevator in Tulsa. The architect and builder are unknown. It is a rare survival of a 1920s commercial building.

The view above is the from the southwest. Below the view from the northwest. The sign reading "Hooper Bros Coffee" on the front of the building is raised brickwork.

As can be seen above, the south facade has rectangular windows. There are panels with raised decorative brickwork between the windows of the two stories. The windows on the west facade have low arches. The west facade had a painted sign that is still faintly visible. The north facade also had a painted sign that can only be seen in the lessened wearing of the bricks. The corners of the building do not meet squarely, causing them to have a jagged appearance. The corner below in an "interior" corner. It is on the south facade, along the west edge of the, now boarded over, main doorway. I assume it represents an extension of an interior wall that was not built at a right angle to the south exterior wall. The southwest corner of the building has a similar appearance. The Beryl Ford Collection at the Tulsa Library did not have any vintage images of this building online. They did have an image of the 1940 Hooper Brothers Coffee calendar. Thanks to my brother for the photography of the building and to the Beryl Ford Collection/Rotary Club of Tulsa, Tulsa City-County Library and Tulsa Historical Society for the calendar image.
Posted by Dafydd at 3:55 PM No comments:

One of my original ideas in setting up this is blog is that I would talk about Tulsa's architectural history. So far I have done nothing on that. Here is a start. I want to examine some of the evidence for buildings in the Tulsa area prior to the arrival of the railroad.The pictures below were taken from the Beryl Ford Collection, provided online courtesy of the Tulsa City County Library.

Modern Tulsa got its start with the arrival of the railroad in 1882. Tulsa was initially the terminus of the railroad and loading point for cattle driven up from Texas. A small town quickly grew up around the rail station.

Tulsa's history, however, did not begin then. Plains Indians had, particularly the Osage and Wichita lived in the area for centuries before 1882. Folsom points have been found in the area. The areas architectural history started with the arrival of the Creeks in the 1830s. The Lochapoka Creek set up a traditional Creek village centered around a square near present day 18th and Cincinnati. The American Civil War was disastrous for the Creek tribe, as it became a Creek Civil War as well. The Lochapoka village was burned and the inhabitants were driven away, into Kansas. After the war ended, the villagers returned, but they did not rebuild the village. Instead they built scattered cabins and houses. Very little remains from this period.

Below is one of the photographs of buildings from this period in and around Tulsa. According to the Beryl Ford collection, this is the Taylor Postoak home in about 1865. It was located about 1 mile south of the current site of Rader Juvenile Detention Center, on the south side of the Arkansas River. According to an interview with his son, Lincoln Postoak, Taylor was a full blood Creek who was removed to Oklahoma from the East and who fought for the Union during the Civil War. Lincoln was born in 1868, so the if the date on the picture is correct, he is not one of the children in this picture. The children are identified as great granddaughters Bessie and Amy Fife with their father Soda Fife. I, however, have doubts about the date of the picture. Most of the homes in the area were burned during the Civil War. This is an awfully substantial house to have been built in the few months after the war ended. Note that the leaves are still on the trees so this was taken in the summer or very early fall. This photo is surely from at least few years later. The problem is according to Lincoln, by 1868 the family had moved to the vicinity of Coweta.

Regardless of date and identity, this a well built house with clapboard siding of at least two rooms. It is built on a cut stone foundation. The shingle covered roof incorporates the large front porch. The tree and the horse in the foreground block what appears to be a smaller log cabin with a stone chimney. Foliage is visible between and behind the two houses, so these two buildings are not connected. You can't tell what is behind the clapboard, but the Will Rogers Birthplace has similar clapboard siding on a log cabin (see image below). According to the Beryl Ford collection, the Postoak home later burned. Posted by Dafydd at 3:45 PM No comments: